Yeti: The Missus is a curious one.

Boo: In what way?

Yeti: Several. First of all, she has trouble walking on her hind legs, but refuses to go to all fours.

Boo: I think all those things she wears constrict her.

Yeti: That could be. Remember that time when she couldn’t walk at all?

Boo: Yeah. I was getting worried about her.

Yeti: Why? Did you think she wouldn’t walk ever again?

Boo: No, I was more worried about her when she was confined to bed and you started circling her like she was prey.

Yeti: [straightening] I’m quite sure I don’t know what you’re talking about.

Boo: You looked like you were going to eat her…or, at least, taste her.

Yeti: So did you; you circled just like me.

Boo: I was protecting her – watching you.

Yeti: Whatever. She was onto both of us. We’re harmless. But I’m glad she got better. Now she feeds us and I’m just as happy with our food. She is tasty, though….[smacking]

Boo: [diverting] What else about her do you find curious?

Yeti: Well, that thing she does with wet colors on shapes. She makes all these big flat boxes of patterns and sings while she does it. The Mister doesn’t do that.

Boo: He makes his on his “computer”. They disappear in there, but at times he brings them back, like magic. Sometimes hers leave the house with her, and never come back.

Yeti: Her pictures are real; they can live other places, and they smell funny, but somehow they make me happy. I like to look at them. She likes me in the room with her when she makes them. I like to watch but sometimes I just nap. It’s also fun to see if I can distract her from her work – sometimes that’s a tough challenge in that odd room, even for me. But hey, you’re not welcome in there – how come?

Boo: You know I eat everything. She panicked last time I got in there and she had a bunch of wet colors on the table and I jumped up. She yelled, grabbed me quick, whisked me out, and sat and held and looked at me and rocked me. I was both scared and comforted; she was trying to tell me something. I think those colors went bad.

Yeti: Yikes. But they look pretty dry, on those pretty flat boxy thingies.

Yeti: What else what?

Boo: What else about her makes you curious? 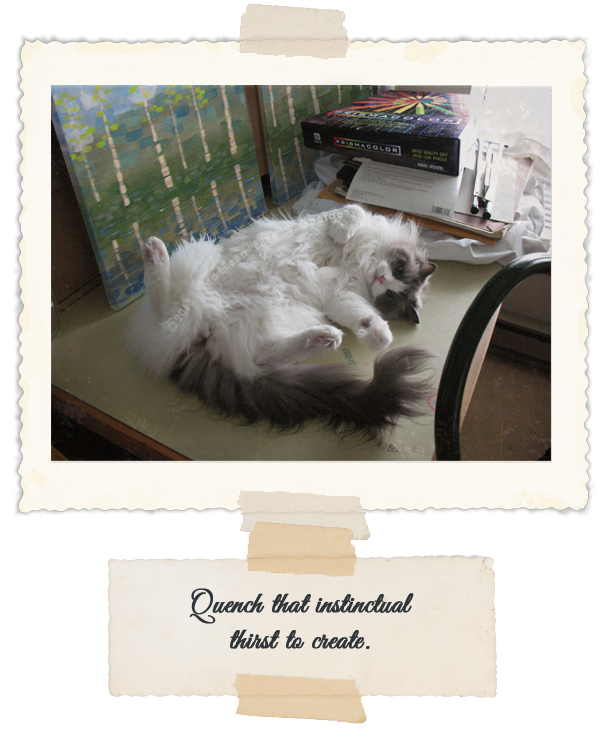 To see the “pretty flat boxy thingies with colors”, go to: eileegeorge.com

Boo: Where were you half the night?

Yeti: The Missus took me to the gallery.

Yeti: [Indignantly] What? I can be art.

Yeti: She put me on a pedestal for heaven’s sake.

Boo: [Sobering] Well, what makes that any different than at home?

Yeti: You don’t have to be jealous. It was most annoying. There were dogs there.

Yeti: I was simply NOT in the mood. They smelled bad.

Boo: How many were there?

Boo: So, you were on display…and nobody bought you? [Grins]

Yeti: She put an NFS sign by me I guess.

Boo: Oh. Then what’s the point?

Yeti: So the other humans could ooh and ah at me too. Her type seem to like doing that. I admit that I did ask for it, winding around her legs till she took me with her. Surprisingly, I got mauled less there than I do here at home. She let me sleep most of the time, on top of her sweater.

Boo: See? You’re on a pedestal indeed! She never lets me sleep on her clothes.

Yeti: She doesn’t have to let you. You do it anyway. She just wanted me comfy. That was kind of nice.

Boo: And the dogs?

Yeti: She wouldn’t let them near me. Others also in charge there protected my space as well, except, of course, from the humans, themselves included.

Yeti: It was…different. I learned things.

Boo: Think you’ll do it again?

Yeti: Maybe. Sometimes you have to shake things up. I like a good party.

Yeti: Not throwing myself at people isn’t anti-social. I’m pretty comfortable with people around me. They’re always very flattering, even if they do make absurd noises at me. And there were so many there! Not all at once, but lots at a time, in and out, and then more.

Yeti: Maybe, like the number of noms in the big food bag.

Boo: Sorry. [Shaking head] I can’t imagine that many people.

Yeti: I couldn’t have either, had I not seen them myself. So many sizes and shapes.

Boo: Sounds like the place was lousy with them. Why were they there?

Yeti: Mostly to look at the art.

Boo: And that’s what The Missus makes with her colors?

Yeti: Yes! And I saw some of the ones there that used to be here – the ones that went missing – they’re in the gallery.

Boo: So that’s where they go! Wait…you said “some” of them.

Yeti: Yes; that’s because a couple were missing even from there.

Boo: Do you think someone took them?

Yeti: People do that there, but they give little pieces of paper or wave plastic in return.

Boo: That doesn’t sound like an even trade. Those color things are really big.

Yeti: Seems to make them happy, though.

Yeti: I’m pretty sure that’s how it works.

Boo: Maybe we should help her make more of the color squares, er, art.

Yeti: She was babbling at me about that. Apparently they make colors for cats.

Boo: Really? Why doesn’t she let us use them?

Yeti: I don’t think she has the cat kind yet. The people sorts are bad, for us at least.

Boo: Ooh, I hope she gets us our own colors. That sounds fun!

Yeti: Me too, but some of them look a lot the same…she calls them “paint”, and the squares are named “canvases” and “paintings” and “art” too. So many names for the same thing; humans are silly wasteful things. …What would you “paint”, if you could?

Boo: Noms, of course. Then I’d lick ’em off the squares.

Yeti: You mean off the canvas – but…how very predictable of you.

Boo: Well, what would you paint?

Yeti: I staple the edges of box flaps with my fangs. A plant pulp perforator, if you will.

Boo: Ha ha, and you get stuck!

Yeti: It always makes the audience smile when my teeth squeak into the cardboard.

Boo: [Shaking her head] You’re not really so prim and proper.

Yeti: Nothing says art has to be so serious. One should enjoy what one does. I do.

Boo: I see. So what kind of artist do you think I should be?

Yeti: Your dream job: you get to work in noms. 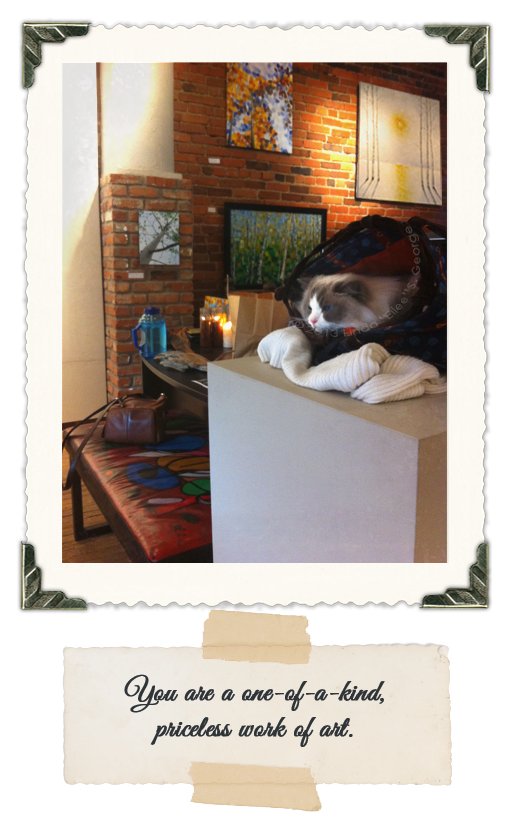 To see the “pretty flat boxy thingies with colors”, go to: eileegeorge.com 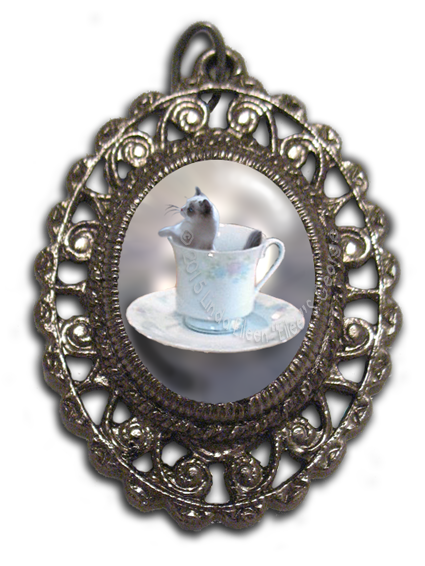 Boo: Wow, she finally cleaned up all that stuff – it’s nice to be able to get around here again without bumping into untouchables.

Boo: Missus was so busy with projects for that…thing…um, that…whatever it was. I was shooed off more stuff than I could identify. It was everywhere.

Boo: “Ladies’ tea”? I thought tea was for everybody.

Yeti: It was a special get-together for ladies at the church. Didn’t you see the program Missus designed? They had a lot going on!

Yeti: Well, singing, and a speaker, and food, and –

Boo: [Smacking] Food? And she didn’t invite us? Grr.

Yeti: Other people made the meal. And you know how humans are about animals at venues with food.

Boo: [Pouting] Yes. Maybe we should have a tea here.

Yeti: Now, I know that even you don’t like tea.

Boo: [Thinks] Huh…I guess not. Imagine that! But I bet I’d have liked the other goodies. So, what else was there?

Yeti: Well, all those decorations Missus made, of course. The clocks, calendars, flowers; other Victorian decorations – she worked hard for weeks and weeks.

Boo: Yes, lots of giant clocks. Some of them even work! Pretty cool…but…what do those have to do with tea?

Yeti: [Shrugs] That was just the theme they chose this year. Apparently women struggle to balance time with family, God, work, errands, and whatever else they do.

Boo: Hmm. Don’t men struggle with that, too?

Yeti: I suppose. But I guess men don’t like frilly teas, so they deal with it some other way. I can’t imagine Mister liking being around so many flowers and wearing a pretty dress!

Boo: [Giggling] Me either!

Yeti: Like time management skills. She is kind of disorganized, and on top of that, a bit of a hoarder – then again, that part was helpful when it came time to coming up with materials for decor.

Boo: So…is it a good thing or a bad thing?

Yeti: I can’t decide. It might be part of her creative process. At least she’s gotten the giant fake flowers and the clocks she made into the studio, and the real clocks back where they usually live, and all the art supplies put back in the studio, and all the papers are gathered and put away. She’s made progress. Now on to the rest of it. The whole place suffered, between that and the trip and her birthday.

Yeti: With time to spare – to dig up an old photo shoot. I guess we’ll wait and see if the rest of it gets better.

Boo: A photo shoot? What now? 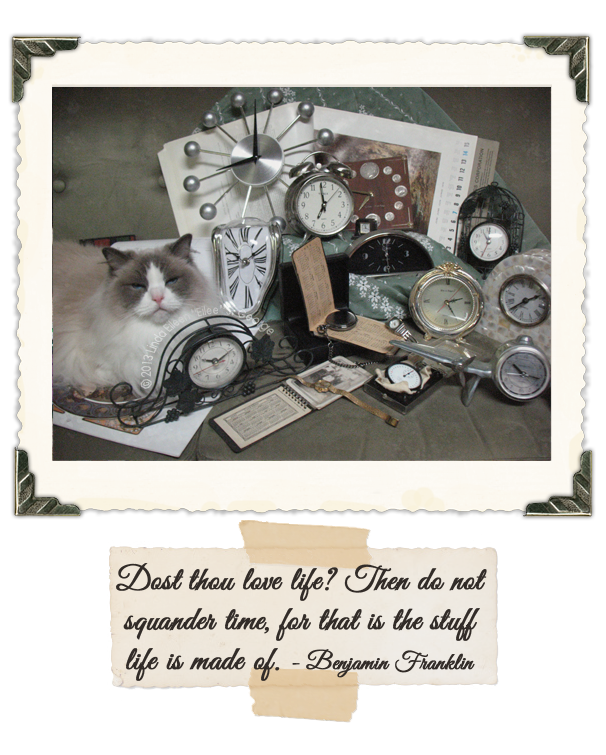 Kitties prefer fish, but WordPress and plugins for site function use cookies (mmm) to give you the best experience on our website. Continuing to use this site tells us you're okay with it!Ok (Purr)